We’ve recently had a “play” with Drone Deploy. This software allows you to capture data and produce many outputs, including .obj and .las files which can be imported into your BIM and CAD models – as well as Unity engine and many other 3D tools.

Some of the features of Drone Deploy are as follows: 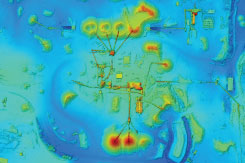 NDVI analysis (The Normalized Difference Vegetation Index (NDVI) is an index of plant “greenness” or photosynthetic activity, and is one of the most commonly used vegetation indices. Vegetation indices are based on the observation that different surfaces reflect different types of light differently.)

In addition to this it provides you with the ability to annotate, measure volume and area as well as distances between objects. Below is a very basic flight at Plumstead Depot. As this was our first time of trialling the software we did not want to over do it. However, the flight took less than 5 minutes to perform and provides a fair bit of data too. All the number crunching is performed on drone deploy’s servers, but all the data is exportable. Since this is the trial version the resolution is not as high as it can be, but it gives a good idea of what is possible.

The next step is do do a bigger flight plan, but also, can you imagine creating a 3D model using a thermal imaging camera? I think that could be pretty cool.

Here is our flight plan

It then gives us this projection:

You can annotate it and add some calculations of volume and area:

We had a go over another part of Plumstead:

The software has only JUST been released so we are learning how to use it. We hope to go back to Plumstead again in a couple of weeks and do a more complex flight plan and hopefully capture more data. We set the height to be 75m above ground – so there are potentials for more/less detailed projections.

I think this is pretty cool and adds more potential uses and benefits for using a drone on sites or in construction in the future. The software isn’t perfect, but it’s a start and something that will be exciting to keep ahead of!

Keep up to date with our latest news and events